This weekend officially signified my first training run for the marathon! I did a nice 8 miles around town on Saturday, even getting in a little distance by the water. All of the snow from the past week, however, was actively melting in the unseasonably warm weather. Awesome because I literally ran in shorts, but not so awesome having my feet soaked through by the time I got home. To me having only my feet wet was way more uncomfortable than runs I have done in a full blown rain when my whole body would be soaked through.
But in the end, a small price to pay to be back outside. I had been doing some runs on the treadmill recently given the weather, and more notably the lack of running space on sidewalks and the road, and I was starting to get a little stir crazy. It makes me wonder how things will go mid winter as I’m sure Mother Nature won’t modify her schedule to accommodate my long runs. Unless I just end up being that lucky!
Heading into the holiday feeling great and looking forward to a few days away from work. I hope everyone has a wonderful Christmas!

What can I say other than this is going to be a totally incredible experience. I feel so honored to be a part of this team. We showed up for our kickoff meeting to cheers and waving signs held by colleagues and patients. I wish I was able to capture the excitement in the moment, but here are some of the signs after the fact. 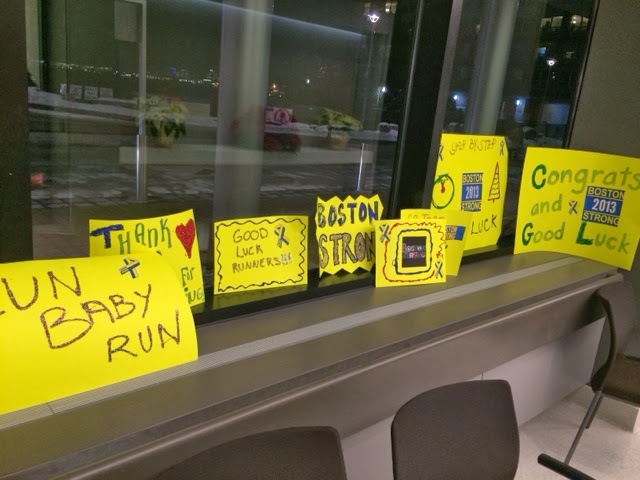 Needless to say, that was an awesome way to start the night!  Best entrance to any meeting I’ve ever attended!
Tonight I got the chance to meet some of my fellow team members. I have to say, it was encouraging to see I am not the only one tackling a marathon for the first time. We heard from our team captains, team psychologist, team running coach and team PT. We even got some swag (here’s some of the goodies). 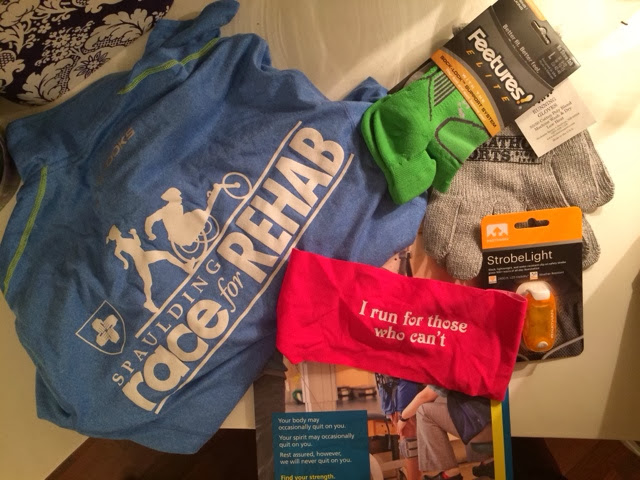 It is so incredible going into this journey feeling supported physically, mentally and emotionally. There are a number of events planned over the coming months for our team and you’ll hear more about them live time. I am excited, and oh so thankfu!,  to have access to such an incredible group of people through this process.

I’ll “officially” be in to training mode as of this weekend so get ready to start sending me cheers along the way!! 🙂

January 18, 2013.  That was the date that I decided to make a change in my life.  More importantly, this was a date when I really meant to make a change.  As anyone who has struggled with their weight can attest to, there are many of these “time to change” dates.  I had some fleeting successes in the past, but inevitably would burn out from my “plan” and revert to old habits and undo any good I might have done over a few months.

I wish I had some pinpointed “ah ha!” moment to speak to, but I think everything just kind of culminated.  I was going to be 30 years old in less than 5 months and I just did not feel good about myself.  This was especially hard when I thought back on my life; I grew up very active playing a number of sports.  I have never been a tiny person but I have definitely been healthier, fitter, and most importantly, happier.  I wanted to find that person again.

Like I said, when I set out to make a change this time I knew I had to have a more realistic approach.  I think my past failures were a result of trying to do it all at once.  Combining eating healthy, exercising like crazy, and giving myself no real flexibility to enjoy life never worked when I attempted to go from zero to sixty.  On January 18, 2013 I decided I would make one change and that change would be to focus on what I was eating.  By in large, I think that has always been my struggle.  If I’m being honest, it still is.  Even at my heaviest, I still lead a relatively active life but that didn’t matter because I had a total disregard for what I was putting in my mouth.  To start I had to revamp my diet.  I know there are mixed feelings about Weight Watchers but I decided that using that program would at least offer some direction to get me kickstarted. For me, the idea of WW was more about having an awareness and an accountability, not so much about having a strong belief in their system. I needed something that would show me, for better or for worse, what I was eating and how much.  And slowly but surely it made me make healthier choices and held me accountable to myself.

To start, I didn’t focus on any additional activity.  I didn’t actively avoid physical activity, but I didn’t make an exercise regimen part of my plan.  From January 18, 2013 until June 2, 2013, with only adjustments in my diet, I lost 40 lbs.

That was a great start.  I was feeling so much better.  On my 30th birthday, I went out for my first run in about 10 months.  That’s being a little generous, too, because my runs in August 2012 were nothing to brag about.  I should back up slightly, because as I mentioned I have had past moments of fleeting success.  The year of 2013 was not my first attempt at running.  I completed my first half marathon, the Half of Quincy, in March 2012.  My finish time was nothing to rave about, but in the moment it was a pretty good accomplishment.  I had lost some weight in that process, but without setting any future goals for myself I found that I severely regressed and regained essentially all of the weight I had lost, going back to bad diet habits and no exercise plan.  That said, back to 2013, after losing my first 40 pounds I knew it was time to add in some sort of physical exercise plan.  I had previously seen how well my body responded to running, so that was my plan.  To run.

And I did.  I started up running again and at a weight close to where I was when I finished that half marathon in 2012, I was actually feeling great! I loved running even more than I remembered.  Being aware of my previous downfalls, I needed a goal and  I decided I wanted to run another half marathon.  Registration for the BAA Half Marathon was only about a month and a half away and that soon became my next target.  The race wouldn’t be until October 2013, but with that on the horizon I knew it would help give me some focus.

I genuinely enjoyed training all summer long.  Late in June, I eliminated wheat from my diet when I felt like I was “doing everything right” but still feeling kind of sluggish.  I found great success with this and while I am fortunate I do not have to be hyper-diligent as I don’t have an allergy to wheat/gluten, I have found that excluding it from my diet has helped with my mental alertness and overall energy in addition to weight loss.  Despite my successes to date, I still struggle with the perfect balance of proper nutrition for running.  I tend to focus on fruits, vegetables, proteins and healthy fats and still track my portions for everything.  While I’ll be the first to acknowledge slip ups, generally speaking I try to be more aware of ingesting overly processed foods.  I do have plans to reevaluate my eating and how I am managing/tracking my nutrition for when I start marathon training.  I’ll likely write more on that in a future post.  (I’m also hoping to share some delicious recipes I make, thus the “Eat” in the title of this blog!)

Anyways, fast forward to the BAA Half Marathon on October 13, 2013.  I finished with a time of 2:10:14, averaging a 9’56” mile.  This was a huge personal accomplishment!  I set out training for this half marathon being like “ok, I’ll just finish without walking.”  As my training progressed , my weight decreased, my fitness increased and I was like “ok, maybe I can do this with an average of a 10’30” mile.”  I beat that pretty substantially.

I felt invigorated! I knew my future success would be tied to having future goals and/or events to train for and so that is how I see myself moving forward for many years to come, if not for the rest of my life.

In September 2013, which was prior to completing the BAA half, I submitted an application to be considered for my employer’s, Spaulding Rehabilitation Hospital’s, 2014 Boston Marathon team.  At the time I applied, I felt motivated but still a little unsure.  The first week of November, I received a call welcoming me to the team.  In that moment, I was overwhelmed with the honor given Spaulding’s involvement in the 2013 Marathon bombings, but on a personal level I remember thinking, “I can do this.  I can run a marathon!”

So it’s December 2013 and I’m approaching the start of 16 weeks of training that will all lead up to April 21, 2014 when I will run my first ever 26.2 miles! I am starting my training down a total of about 60 pounds with a goal to lose an additional 20-30 in the coming months.  That won’t be my focus, but I expect will happen in part given the regimentation of training.

This initial post was meant to give some back story to help you understand what this past year has been like leading me up to this point.  Moving forward, I hope to invite you in to my process of training for my first ever marathon, sharing both the good and the bad (though hopefully top heavy on the good!)  Selfishly, I figure committing to chronicling this process is yet another means to hold myself accountable.  It will help greatly if people get invested in reading and commenting, but even if not the fact I am committing to publish the process on the internet will hopefully do this in and of itself! (Though readership would be nice : ) ).  I hope that my friends, family, and maybe even strangers!, find it entertaining enough to keep coming back for more.  And who knows, maybe it will even be provoking enough to engage some participation.  I don’t pretend to be, nor do I hope to come across, any sort of expert about running or health. I am someone who has found something that has worked for her but it is always a work in progress and I am open to thoughts, suggestions and any advice!  I readily encourage input from other more seasoned runners to help me continue on my journey, well beyond my first marathon.

Also, please bear with me while I learn about making this site a little more interactive and aesthetically pleasing.