Today I ran a half marathon race, the Marathon Park Prep in Ashland, MA. What a tough course! It was basically all hills, but with that considered I’m pretty pleased with my time of about 2:18 (still awaiting official race time).

I had a couple of reasons for wanting to do a race mid-training for the Boston Marathon. First, running a race was a nice change of pace for the weekend runs. Who doesn’t love to get little kid high fives when they’re running? I like it so much I might hire some to be strategically placed on my upcoming weekend runs.
Second, I figured doing a race before THE BIG RACE would be a good means of practicing. It served its purpose in that regard and here’s what I learned:
– I need to work a bit on early pacing. Knowing me and how I am, I know going out too fast is going to be an issue I have, even if I’m actively aware and trying not to head out faster than I should. I get easily excited in moments like this and the adrenaline takes over. Today was at least a real life reminder of what this will be like. Can someone/everyone remind me not to get too excited on April 21st and use up all of my energy early on?!
– It was definitely important I practiced water grabs. I’ve only done a few races, but I never took water during any of those. Since that’s clearly not an option in doing a marathon, and since I don’t intend to carry my own water, practicing grabbing from the volunteers was key. I’m happy to report that I only dropped one cup, kind of inadvertently flinging at my unknowing hydration supporter, and only spilled one cup entirely all over myself. After those mishaps, it was relatively smooth sailing.  I’m not entirely convinced I’ll have it down to a science in a matter of a few weeks, though, so sorry in advance to anyone who hands me water…it may get messy.
– I need to practice chewing. After many recommendations I have opted to try the Clif Shot Bloks instead of Gu. Overall, much happier with these and I think they’ll be a better option. I have a new bib/fuel belt that worked great and I figured out a way to carry this new stuff that I think is going to be ok for the actual day. The only thing is I aspirated on a piece of Blok around mile 10, inducing coughing and a mild flash of terror about my mortality. Maybe scarier on this race because less people were around. At least on marathon day someone in the continual crowds has got to know the heimlich, right?
– Dear hills, I own you! This was a wonderful thing to feel after today! The course was definitely hilly (elevation map below) but I didn’t need to walk any of them and actually passed many who couldn’t handle the incline. Not gonna lie, that felt pretty awesome!

– I still don’t look good in running pictures. Granted there were only a few photographers out on the course, and I haven’t seen the actual evidence, but I just know.
*UPDATE 3/17/14: actually not horrrribbbleeee….probably best it was so far away! 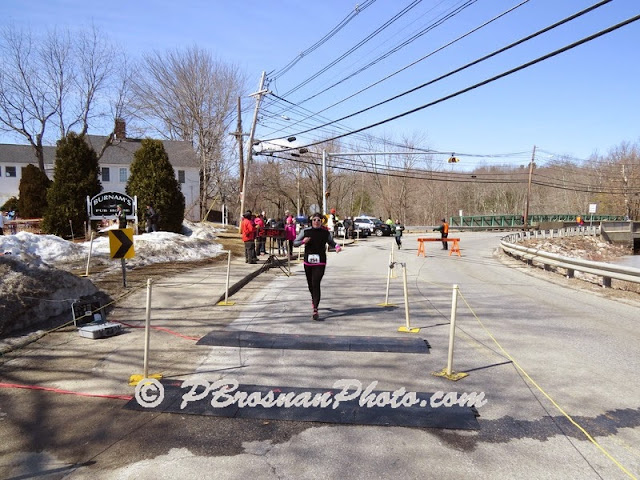 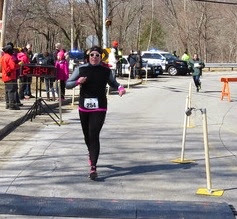 -I actually think I could have kept going! What a thing to feel when you’re training for a marathon! I obviously did this 13 miles faster than I will during the marathon, but regardless I got to the end and could actually see myself continuing on. Mentally I’m stoked this was how I felt at the end of this race. This confirms I’m well on my way to completing my first 26.2! 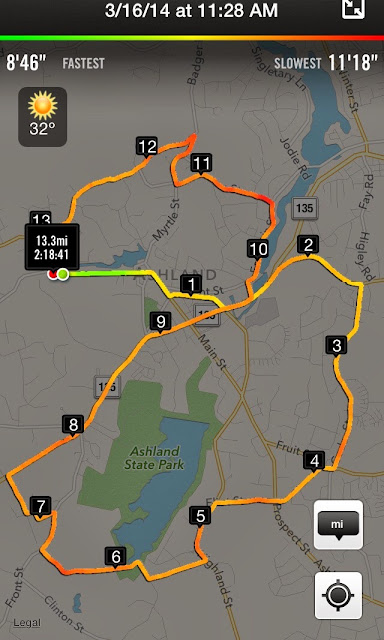 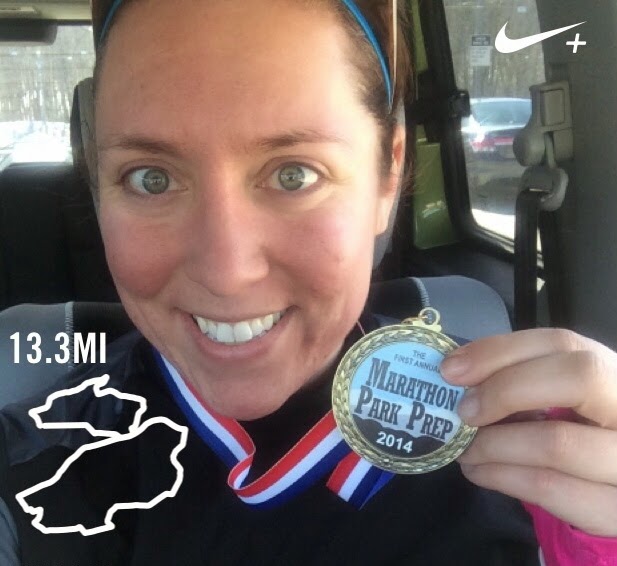