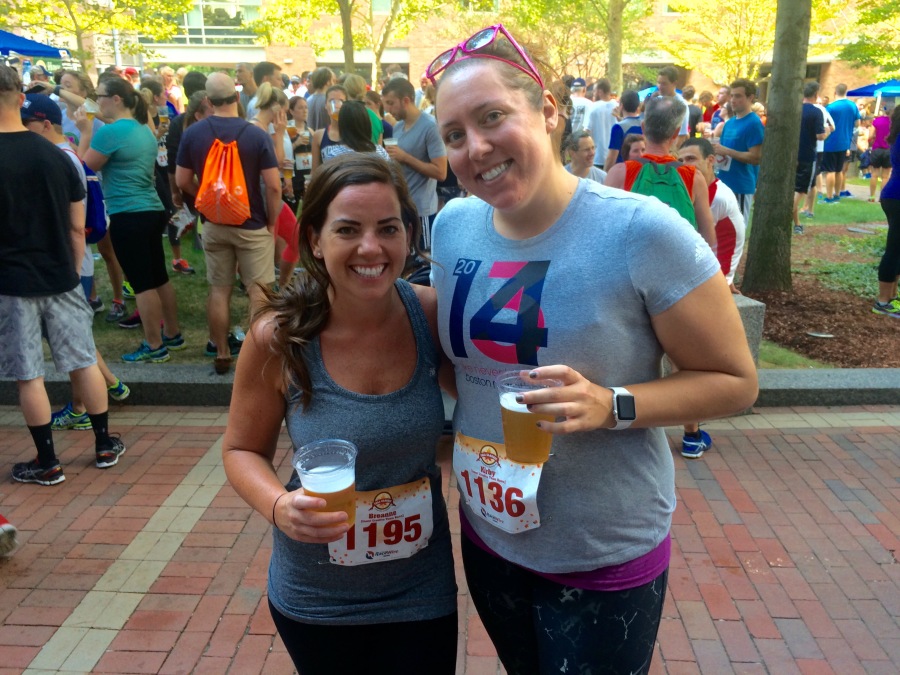 So after yesterday’s tough 20 miles, it’s no surprise I woke up this morning pretty tight and sore.  (I also went to bed at 8:30 p.m. last night.  I debated whether to share that or not, but there it is.  Raging Saturday night!  I feel like waking up in the 4’s and trudging through 20 miles allows me to go to sleep whenever I want! Anyways…)

I seriously woke up feeling like why are you so dumb signing up to do a 5K after your longest training run for the season to date and how am I seriously going to do this without hobbling and hurting myself?  I was really excited, though, because today’s run made history for my friend, Breanne, as it was her first ever 5K!  I totally get that running may not be for everyone, but I like everyone to at least give it a try before definitively saying “no.”  This has been an ongoing discussion between Breanne and I and after much motivational coaching (i.e. friendly threatening/peer pressure) she agreed and signed up and I was not going to drop her on this big day!

I’m super proud of her given her evening of Bachelorette Partying last night.  For someone who was saying she hasn’t been running enough and expected to finish around 40 minutes, she ended up rocking it with a time of 32 minutes and change!  I had not gone out with her recently so after I finished I was waiting at the finish trying to capture the triumphant finish when fortunately another friend texted to ask where I was and when I said I was waiting to capture Breanne’s finish she was like, “oh yeah, we’re already at the beer.”  Ha!

I wasn’t exactly sure what she was going to say about the experience, but I was happy to hear her talking about how it was more fun than she expected.  She admits she didn’t want to talk it up too much because she knows I’ll have her doing every 5K in the area, but I think I’ve made at least a partial runner out of her.

As for me, I admit that my post long run rituals are probably less than ideal.  I often feel so spent (e.g. 8:30 p.m. bedtime) that it’s really easy to fall into a keep it easy, a.k.a. barely move day, and I know that’s like a runner’s no-no.  I definitely felt tight (it’s particularly on my right side, butt and hamstring) but by about mile 2 toay I felt pretty awesome considering.  While the soreness was still a little evident, the tightness had essentially melted away.  I didn’t expect my best 5K time, but I was kind of expecting my worst.  Well surprise, surprise I averaged at 9’50” pace and finished with a time of 30:40.  So I’m feeling pretty great about that and I can feel the benefits of being active the day after the long run since my legs are feeling much better as I’m writing this (or is that the result of the beer? hmmm…)

We didn’t quite get our 20 people team for a private beer tent, but we had fun nonetheless.  On to the pics!

All in all, it was a great way to spend a Sunday morning and some much needed movement for my weary legs.  I’ll take tomorrow as more of a true rest day and hoping to set myself up with a solid week of training to tackle 18 miles next weekend with the goal of feeling strong by the end!

Until next time, happy running!